The ‘Jubilee Jestival’, which runs from June 2nd-10th, will see the launch of a spectacular new birds of prey show with falconers on horseback.

The new display, which is set to music, demonstrates the partnerships which existed between man, horse and falcon. 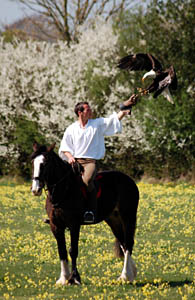 The display requires a high level of equitation and falconry skills as the birds and horses are moving at speed. There is also a huge element of trust and synchronisation between the participants as they recreate a scene that would have been common in times gone by.

The task of training the hawks and horses fell to Longleat Safari Park’s Head Falconer, Jimmy Robinson, who also works with the Hawk Conservancy Trust.

Jimmy, who had to choose between a career in horse-riding or falconry as a lad, said: “‘Hawks & Horses’ is a highly choreographed display and we have been rehearsing and training for months.

“It’s great to finally be able to combine my two favourite occupations – horse-riding and falconry!

“Now we are ready for our visitors to see the finished display and I certainly hope that they approve,” he added.

As well as the new falconry displays, Longleat will be bustling with a cast of colourful historic royal characters including Queen Elizabeth I, Boudicca, Henry VIII and Queen Victoria who will be mingling with their subjects in the grounds.

There will also be high jinks and japes from a team of jesters and strolling minstrels will be providing their own unique take on popular music through the ages (June 2nd-5th only).

In Longleat House itself there will be a special exhibition relating the extraordinary story of the 6th Marquess of Bath’s decision to go to the Coronation on June 2nd 1953 in his state chariot.

Made in about 1820, the horse-drawn carriage had last been used to go to a state ball at Buckingham Palace in 1913 and caused consternation as it travelled through London to Westminster Abbey!