New Gargoyle to be carved for Salisbury Cathedral

The gargoyle to be replace on the Chapter House, Salisbury Cathedral

A new gargoyle is to be carved for Salisbury Cathedral Chapter House by Matt Barton, one of Salisbury Cathedral’s skilled stonemasons. The word Gargoyle comes from the French word ‘from the throat’ because water is discharged through the mouth, and it is partly the water discharge that causes weathering. 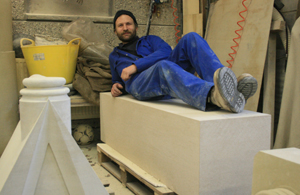 Matt Barton, Salisbury Cathedral stonemason, with the block of stone to be carved

Matt has been given the rare opportunity to carve a new gargoyle to replace one which is badly weather damaged. It will be carved in Portland stone from a block weighing around 620kg (over ½ ton) and it will take Matt approximately 470 hours. “It’s a great honour to have been asked to carve the new gargoyle, not many people get to do this. It’s a really interesting project, and I’m looking forward to going through the process and seeing the new gargoyle emerge from the stone,” he said.

The original gargoyle has already been removed and it is due be mended so it can be used for reference. The new gargoyle will be similar but it will have an improved design to help it achieve the best long term survival.

Replacing a gargoyle is very rare. Two were replaced on the cathedral’s West Front in 1998 but none have been worked since. When completed, the new gargoyle will be displayed in the cloisters for the summer months before being installed in its permanent home with 6 other gargoyles on the Chapter House (including a blocked off non-functioning medieval gargoyle).