Thousands turned out to meet The Queen in Salisbury. She was last seen publicly in the city 38 years ago.

She arrived by Royal Train at Salisbury railway station and then travelled by glass topped Bentley down Fisherton Street and the High Street where she entered the Cathedral Close. 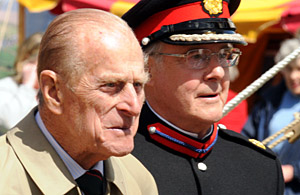 The Duke of Edinburgh with Lord Lansdowne

The Queen wore a bright pink coat with black detailing and she was accompanied by her husband, the Duke of Edinburgh.

She was greeted in the Cathedral Close by a special guard of honour formed by soldiers from 4-rifles, based in Bulford. The royal couple then entered the Rifles Regimental Museum where they had a seasonal lunch with a local influence. The wine and beer were also local.

At around 1.30pm, the royal couple were then driven to the Wiltshire Council area board tents which showcased the different regions of the county. They visited the Westbury, Pewsey, Amesbury and Marlborough tents and spent at least 20 minutes looking at the displays. As they toured the tents, the crowd waved flags and some were lucky enough to be able to present her with flowers.

She was then greeted by The Dean of Salisbury Cathedral as she entered the building. Inside, she met school children working on a Magna Carta project and she also spoke to the stonemasons.

On exiting the Cathedral, she unveiled a commemorative Portland stone plaque made by stonemason Carol Merriman and she watched The Salisbury Plain Military Wives Choir sing in the arena.

The royal couple departed by car at 2.30pm.

Despite the heavy downpours in the morning, the weather brightened up by midday, allowing The Queen to view the whole event in sunshine. Some of the crowd had not been so lucky as they had arrived very early and had got pretty wet. 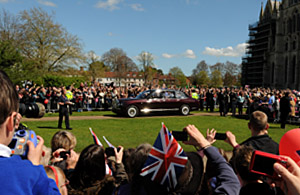 There was plenty of entertainment throughout the day to keep even the wettest of the crowd happy including theatre by The Potterne Mummers, a hawk display, roving jesters and medieval jousting.

It was a day to remember for all.

To see pictures from the day, view the gallery