Despite heavy rain and a very muddy car park, around 14,500 people gathered at Stonehenge to mark sunrise on the longest day of the year.

The moment of sunrise happened at 4.52am but because of the bad weather no-one could see the sun. That didn’t put anyone off their celebrations though and sunrise was welcomed by cheers, clapping  and the blowing of horns.

Drummers had been drumming all night keeping people entertained and they were still going well after dawn, with people dancing and celebrating in their own unique ways. 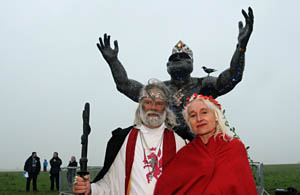 The stone circle wasn’t the only large presence in the landscape this year. A 22ft, 7 tonne sculpture, called Ancestor, was moved to the stones by 32 Regiment the day before. Ancestor depicts a man with his head thrown back and arms open wide. It seemed very appropriate to have it at Stonehenge for the solstice.

For druids, summer solstice is very important and it is a time when they often perform important rituals. Titular Head and chosen Chief of The Loyal Arthurian Warband, King Arthur Pendragon said: “We performed a few handfasting ceremonies and initiations and were able to enter the centre of the stone circle at dawn to perform our ceremony which is often not possible with the amount of people usually attending a summer solstice.”

It seems that even the prospect of torrential rain isn’t enough to put people off celebrating what is important to them.