The residents of Bouverie Avenue in Salisbury, came out in force to enjoy the Street Party to celebrate the marriage of Prince William to Kate Middleton. The road was closed and the party was officially opened by the Mayor of Salisbury, Brian Dalton. Bunting and flags hung from the houses, home-made cakes and sandwiches covered the tables and the sun even came out too.

Children enjoyed a bouncy castle and traditional games such as limbo and residents of all ages ate, drank and made merry. Fancy dress outfits ranged from Prince Charles and Camilla to a few corgis. A prize was awarded for the entrant who ‘looks most like a corgi’.

Organised by Helena McKeowan and Dave Healy, the party was a great success, bringing residents together and creating a party atmosphere. 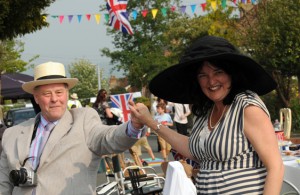 Other streets around the county also held festivities to mark the historic day.