Bowood wins 2014 Garden of the Year

The beautifully nurtured English gardens of Bowood House, nestled in the scenic Wiltshire countryside, have won the 2014 Garden of the Year Award, sponsored by the Historic Houses Association and Christie’s. Now in its thirtieth year of celebrating some of the country’s most spectacular gardens, this prestigious national award is designed to recognise the importance of gardens with outstanding horticultural and public appeal, either in their own right or as the setting for a historic house.

Charles Cator, Deputy Chairman Christie’s International commented: “Christie’s is delighted to sponsor the Garden of the Year Award in association with the Historic Houses Association and it is particularly exciting that the superb gardens at Bowood should have won the 2014 HHA/Christie’s Garden of the Year Award as they are a testimony to great care, passion and dedication of Lord and Lady Lansdowne in nurturing and continually enhancing this sublime setting, which is enjoyed by so many visitors each year. We hope this award encourages even more people to discover the extraordinary magic of Bowood.”

Richard Compton, President of the Historic Houses Association commented: “The beautiful gardens at Bowood House, surrounded by ‘Capability’ Brown’s sublime park have been enjoyed by many thousands of people since they were opened to the public in 1975. The enormous amount of work and skill put into their immaculate presentation by Lord and Lady Lansdowne and his team of dedicated gardeners pays off handsomely as all visitors can see for themselves. The famous Rhododendron Walks are an added bonus when in May they present us with a blaze of colour to enjoy. I am delighted that Bowood has won the 2014 HHA/Christie’s Garden of the Year Award and congratulate Lord and Lady Lansdowne and all those involved in the care and upkeep of these magnificent gardens.”

Located along the tree-lined ascent stands the beautifully maintained and welcoming Bowood House, home of the Marquis and Marchioness of Lansdowne. Originally built on the site of a hunting lodge and under the ownership of the first Earl of Shelburne, Henry Keene (1726-1776) was commissioned to extend the house in 1754. The second Earl, who gained the title of Marquess of Lansdowne after his successful term as Prime Minister, employed the skills of celebrated architect Robert Adam (1728-1792) to realise his grand ideas. The collaboration saw the construction of spectacular features including a Diocletian orangery, a menagerie and a mausoleum in tribute to his father. By 1770, the Big House and Little House were joined, this was one of the many renovations that followed over the centuries to reflect the changing tastes and styles of the reigning Marquess, who employed noted English architects, such as Charles Robert Cockerell (1788-1863) and Sir Charles Barry (1795-1860).

The Marquis of Lansdowne, owner of Bowood House & Gardens comments: “There are few accolades which could be more rewarding for all of us at Bowood. To know this award has been adjudicated solely by our visiting public, says it all. So “thank you” to our visitors and congratulations to our dedicated staff. Bowood continues to evolve. Each generation leaving their legacy, reflecting both fashion and social change. Today, Bowood gives pleasure to thousands and employment to many.”

Like the house, the stunning gardens of Bowood have undergone significant changes throughout the decades, to mark the style and preferences of their owners, which encompass almost every period of the traditional English garden in Bowood’s history. Extending over 2,000 acres, the breathtaking parklands designed by Lancelot “Capability” Brown from 1848 to 1849, provide an opportunity to escape into a time when waists were wisps and hair was high. With gently sloping lawns stretching down to the placid lakes and distant views to the Wiltshire chalk downlands, delights within the park include the Pleasure Grounds – which feature a rare and monumental arboretum and pinetum, planted by John Spencer, Head Gardener, in a geographical formation reflecting their country of origin, a legacy which continues to be extended to the present day. The many other highlights range from Cascade, Doric Temple, Terrace Gardens, Rhododendrons Walks and, for children, the fantastic Adventure Playground. 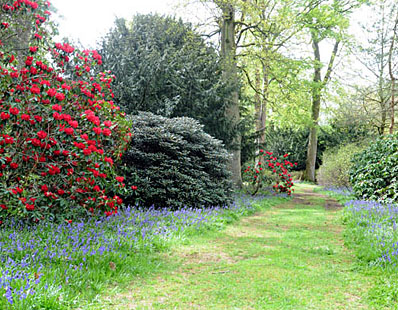 To the South-West of the house, on a wooded ridge, stands the family mausoleum, which also marks the beginning of the Rhododendron Walks – one of Bowood.s greatest treasures. Spanning over seventy acres, the extensive range of thriving rhododendrons, azaleas and magnolias, were first introduced in the mid-nineteenth century by the 3rd Marquess who recognised a unique area of acid soil that is perfect for this species. Recently discovered under the wooded canopies of the towering oaks and sweet chestnuts, the Rhododendron Walks have been the subject of one of the most exciting and significant horticultural finds – over thirty original hardy hybrids were thought to be extinct. Ancestors of the rhododendrons, first collected by botanist Sir Joseph Dalton Hooker (1817-1911), continue to be a source of pride and delight not only for Lord Lansdowne but also for Wiltshire. The blossoming magnolias and handkerchief trees that are spread amongst the Rhododendron Walks run wildly through the natural valley known as The Woodland Garden surrounding Kennels Lodge, which is surrounded by the enormous range of rhododendrons and azaleas that flower over several weeks from late April until early June, creating a breathtaking sight. The woodland oasis of blossoming floras is considered to be one of the most exciting gardens of its type in the country. Lord Lansdowne.s father was one of the first to open our gardens to the public through the National Gardens Scheme since its inception in 1926.

The four–acre Jubilee Garden, shaped by a small natural valley with magnificent cloister of yews at each corner, sits within the vast expanses of the radiant rhododendron gardens that have been forged by a small natural valley, lined by yew trees outlining the parameters. This idyll is the newest reflection of Lord Lansdowne.s unfaltering passion, featuring some of the earliest known hardy hybrids to be found in the United Kingdom.

Notable features to the front of Bowood are the famous terraces that were built on two levels by Robert Smith Smirke, that date back to the 1800s. Designed to remind the 3rd Marquess of Italy, Smirke created the Upper Terrace in 1818, while the Lower Terrace was laid out by George Kennedy in 1851, evoking the Italian tastes of the period. Originally planted with hundreds of thousands of annuals in intricate designs, a more simple style has now been adopted that can be better managed by the team of just four talented gardeners. A more traditional style of planting can be seen on the Upper Terrace, in a scheme designed by Rosie Abel Smith that encompasses immaculate lawns, leading to the serene lake and beyond.

Central to the design of the park is Brown’s Great Lake, almost a mile long, winding sinuously like an enormous river. The outflow is channelled through a series of aqueducts which feed Hamilton.s Cascade, constructed fifteen years after the completion of the park. A stunning torrent of white water falls 30ft over an outcrop of rocks which never ceases to amaze old and young alike. Set at the head of the small headland is the Doric temple, continuing the classic architectural theme.