Seven of the most beautiful cars in the world growled up the sweeping drive of Longleat House today during the Wiltshire section of the Chris Evans Magnificent Seven tour for BBC Children in Need. 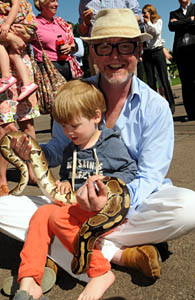 The Magnificent Seven are:

Seven lucky couples put in the top bids in a charity auction to drive these amazing cars.

Unusually the cars were late because of a puncture received en route to Longleat but it was soon fixed and the convoy could carry on.

The tour started this morning at the Berkshire home of Chris Evans and will end in a few days time with the cars tearing up the famous Goodwood Hill climb at the Festival of Speed.