More than 10,000 car enthusiasts turned out in glorious sunshine for the third Wilton House Classic Rendezvous and Supercars day. 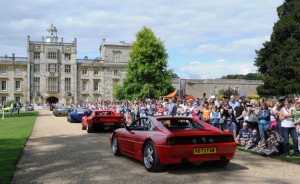 The supercars roared in at midday revving their engines and cruising into the beautiful grounds of the Wilton estate. The assortment of hypercars was pretty impressive – from a Bugatti Type 35B to a Ferrari Enzo. Some had their doors up for extra effect as the cars completed their grand entrance to the front of the house in preparation for the rev off to see which was the loudest. The prize for this was awarded to the Ferrari Enzo which registered at 129 db. 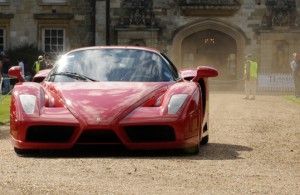 The Ferrari Enzo was loudest in show

A Benetton F1 car was on display, a Spyker C8 Aileron, a Lamborghini Aventador and Lord Pembroke’s own car – a Bugatti Veyron.

The Best Presented Car was won by a Gallardo – the Loudest Car competition winner last year and Lord Pembroke awarded the best engineered car prize to a fellow Bugatti owner. Car of the Show was declared to be a Koenigsegg Agera. 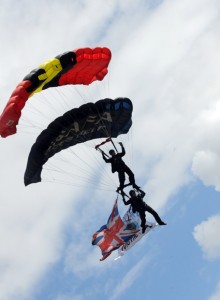 Supercars weren’t the only attraction. There was an enviable display of classic cars, live music, acrobatics from a Yak plane and a parachute display from the Royal Artillery Black Knights ending in a skillful landing by two parachutists stacked on top of each other.

The event was to benefit Salisbury District Hospital’s Stars Appeal of which Lord Pembroke is president, and the Wilton House Trust.