After two rounds of thrilling British Cycling Elite Road Series action, Raleigh GAC’s Steve Lampier will head to the Cycle Wiltshire Grand Prix on 10 May with the overall and team lead to defend.

The Elite Road Series features eight rounds of action which began in April with the Chorley Grand Prix followed by an epic edition of the Tour of the Reservoir later in the month.

The Cycle Wiltshire Grand Prix will be the third and final instalment of the first phase of competition, the Spring Cup, before a two-month break ahead of the second Grand Prix phase which begins in Staffordshire in July. 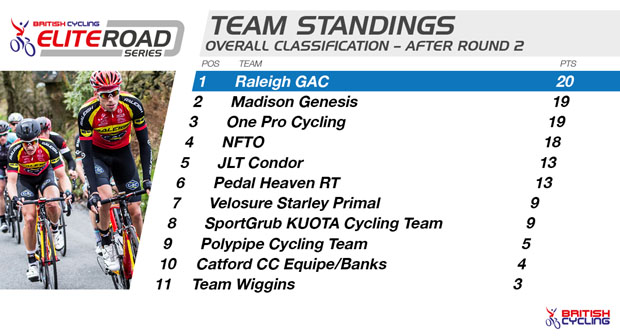 Lampier was second behind NFTO’s Ian Bibby at the series opener in Lancashire and repeated the performance on the first day of Tour of the Reservoir, braving horrendous conditions in Northumberland.

A third place on the equally challenging second day cemented Lampier and his team’s position at the top of the table ahead of the Spring Cup decider in Wiltshire.

Lampier (above left) has a comfortable margin at the head of the standings on 83 points ahead of the injured Eddie Dunbar on 66 points. The 18-year-old, who rides for NFTO, fell on stage one of Tour de Yorkshire and broke his collarbone, after wowing the crowds with his attacking riding earlier in the day.

Dunbar’s absence means that Madison Genesis pose the biggest threat with Erick Rowsell and Mark McNally third and fourth on 59 and 58 points respectively.

Rowsell’s form has been exceptional this season, winning stage one and the overall at Tour of the Reservoir and finishing as the highest placed British rider at Tour de Yorkshire, taking eighth on general classification.

McNally too was on form in Yorkshire, part of a long-standing break on stage two.

However Lampier will take comfort at his own performance in the three-day ASO event, the 31-year-old from Truro finishing in the top 20 amid World Tour riders. 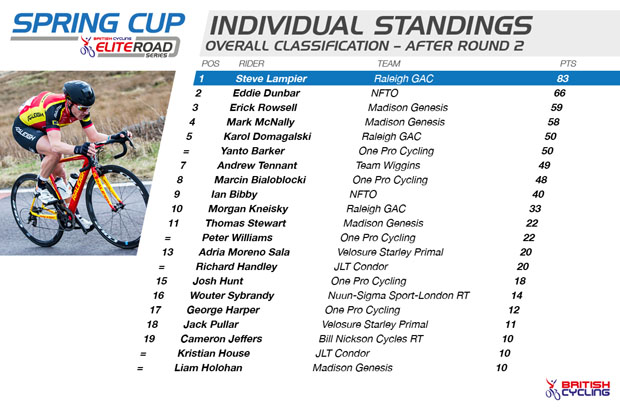 The 173-kilometre race begins with a neutralised start section in Salisbury before the flag drops and racing begins in Wilton.

There follows five laps of the main circuit, which heads west then south west on to the A30 bound for Fovant. The route drops south over Fovant Down before turning east through Broad Chalke and Bishopstone. Another key climb at Windwhistle and the riders are back at Wilton.

The conclusion of the race will see four laps of a shorter circuit between Wilton and Burcombe before a winner is decided. 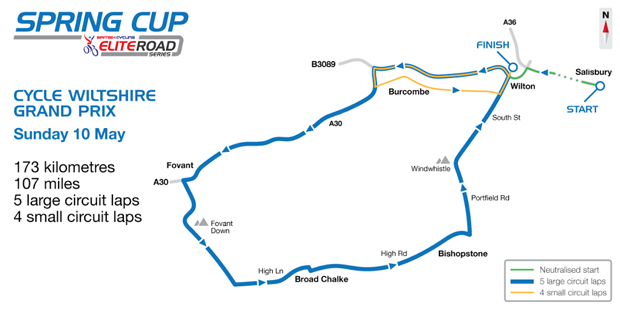 A full race report, images and video highlights will appear on the British Cycling website.