The resilience of Bowood’s 60 acre Rhododendron Walks means that, despite the inconsiderate prolonged winter, the annual six week season is still set to begin on Friday 26 April.

“Nature has the most extraordinary ability to adapt  and catch up,” comments the 9th Marquis of Lansdowne, a passionate gardener whose rhododendrons are his pride and joy. “I don’t think I’ve ever seen flower budding looking so hopeful at this stage which suggests that 2013 will be one of our greatest flowering years. Freak snow and frost damage is still of course possible however the magnolias and camellias will be a stunning sight nevertheless with some of the early rhododendrons also in flower.”

Indeed visitors to the highly-acclaimed Bowood’s Rhododendron Walks (between Calne and Chippenham) will have even more to experience in 2013 thanks to Lord Lansdowne’s new addition of the four-acre ‘Jubilee Garden’ which he started planting in 2006. His seven year labour of love has been shaped by a small natural valley with magnificent clumps of yews at each corner.

“My great-grandfather, the 5th Marquess – who had been Viceroy of India from 1888-94 – had considerably expanded the rhododendron garden in his time and these corner markings suggest he had been intending to create a garden here over a 100 years ago,” highlights Lord Lansdowne. “Running through the valley here is a gentle stream that is fed from a worked out quarry near Kennels Lodge, at the entrance to the Rhododendron Walks. The quarry spring never runs dry allowing water loving plants to thrive. A further advantage of this spot is that it is ring fenced against deer damage unlike the remainder of the garden.”

“The Jubilee Garden’s flowering of the plants actually spans the best part of eight months.  Indeed there was a rhododendron in full bloom back in early January.  A sequence of magnolias, azaleas, rhododendrons, cornuses, eucryphias and finally hydrangeas will all have their turn throughout the season,” expands Lord Lansdowne.

He goes on to add, “Scattered amongst the Jubilee Garden valley are some exceptionally rare plants.  The “Nothofagus alessandri” from the Maulé Valley in Chile – now almost 20 feet tall – is perhaps the only species of its type in this country.  There are five giant tree ferns flourishing in a hollow with its own micro-climate while an “Acer cordatum serrata” (recently discovered by Michael Wickendon in China’s Dulong region) is another rarity.”

Lord Lansdowne’s development of the new Jubilee Garden is very much in keeping with the family tradition of planting that has been pursued by successive generations since the wider woodland garden was originally laid out around 1850 by the 3rd Marquess of Lansdowne.  Featuring some of the earliest known hybrids to be found in the UK, this spring woodland garden never disappoints and is unique to Wiltshire, being on a narrow strip of green sand which runs between Poole and the Wash. 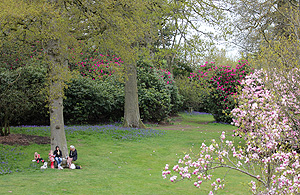 With the Rhododendron Walks accessed via their own dedicated entrance (off the A342), there are even more horticultural wonders to be discovered just two miles away at Bowood House & Gardens (www.bowood-house.co.uk) which is open to the public through to November 5.

Home to the descendants of the 1st Earl of Shelburne and the 1st Marquess of Lansdowne since 1754 Bowood is set in 2,000 acres of Grade I listed parkland mapped out by the fashionable 18th century garden designer, Capability Brown in the 1760s. Over half the house is open to the public (with the family living in the remainder) as well as over 100 acres of gardens and grounds. Virtually every period of English garden design, from the Georgian period onwards is represented here.

Guided tours of Lord and Lady Lansdowne’s four-acre private Walled Gardens,  just behind the House, are scheduled once a month. Those keen to join these tours (which include a two course lunch in the House Restaurant) should make a diary note of the following Wednesdays: 17th April, 15th May, 19th June, 17th July, 14th August, 11th September and 16th October.  (Dedicated groups of 20 or more can book their own specific tour of the Walled Gardens, on any week day during the House & Gardens’ open season.) The Walled Garden tours include a two-course lunch and tour of the arboretum.

If combined with a visit to Bowood House & Gardens on the same day or different days, the combined, special ticket price is £15 per adult and £13.50 per senior citizen.

To check on the latest conditions of the Rhododendron Walks, call 01249 812102 or visit http://www.bowood-house.co.uk/rhododendrons/seasonal-diary for updates from Bowood’s Head Gardener and Lord Lansdowne.

Starting at 11am, the two-hour Private Walled garden tour is priced at £27.50 per person and also includes admission to Bowood House & Gardens and lunch. A further £3 will grant admission to the Rhododendron Walks alongside the 15th May tour.