Wiltshire gardeners put on a good show during 2010 at the greatest flower show on earth – The RHS Chelsea Flower Show.

2010 saw Raymond Blanc cooking in the Smallbone Alfresco Kitchen on Main Avenue. Smallbone offer bespoke luxury indoor and outdoor kitchens and are based in Brompton Road, Devizes. They actually designed and built the kitchen for Raymond’s cookery school at Le Manoir aux Quat’ Saisons. Owner Leo Caplan was on hand to show visitors around the ‘oak and silver’ kitchen. Honey coloured European Oak, polished nickel handels, dark Marinus granite, glass and steel created the interior of the kicthen, whilst The Orangery (created by Amdega Conservatories) bathed the kitchen in natural light from the glass atrium roof. The doors open into the garden and terrace, designed by Chelsea gold medal winner Stephen Woodhams. Box hedging defines the dining area and a fireplace makes eating out possible, even on colder nights.

The Federation of British Bonsai Societies put on a fantastic display of minature trees in the Grand Pavillion. Reg Bolton from the Swindon and District branch proudly showed off the collection of neatly manicured bonsai. 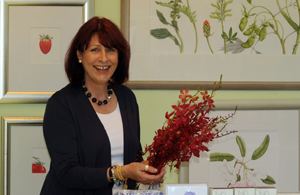 If art is your thing, the stand from Devizes floral artist Ann Swan was the place to head for. Beautiful paintings of flowers and trees covered the walls. Detailed pencil drawings and paintings depict flowers beautifully. Ann is one of the UK’s leading botanical artists and has even supplied royalty.

Philip Simmonds impressed with his elegant blue handmade sculptural ceramic pots. He is based in Chippenham and has won numerous RHS certificates of merit. His calming designs are inspired by architectural and garden styles, and celebrate the beautiful colour palette of changeable English weather. 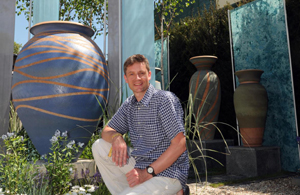 The National Association of Flower Arranging Societies put on a fanatstic display in The Grand Pavillion. Shirley Preston from Bradford-On-Avon and the Devon and Cornwall team set up the impressive stand that won a Silver-Gilt Medal. NAFAS is an educational charity dedicated to the promotion of the artistic use of all types of plant material through the medium of its flower clubs for both adults and children.

Agralan, the plant protection specialists from Swindon, Kit Stone conservatory furniture and accessories suppliers from Swindon, The Botanic Nursery from Melksham and Westdale Nurseries from Bradford-On-Avon were also at the show.