Two Wiltshire exhibitors are celebrating winning Gold medals at the RHS Chelsea Flower Show. The Botanic Nursery and the Federation of British Bonsai Societies  both had stunning displays in the Great Pavilion and they very much impressed the judges with their horticultural talents. 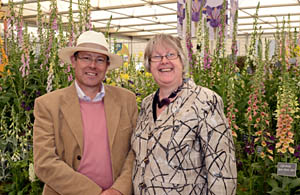 Terry and Mary Baker from The Botanic Nursery

Foxglove specialists Terry and Mary Baker from The Botanic Nursery had a very naturalistic stand. “We’re thrilled that after many years we are getting across the idea that displays need to be pieces of art. The same style is now being used in the outside gardens and that’s rather gratifying. There’s an evolution to a more natural style and the displays are now pieces of art, not mere exhibits,” says Terry.

“We are heavily influenced by people like Monet who understood colour,” he explains. This is evident in their beautiful display of foxgloves, aquilegia and verbascum.

Reg Bolton from the Federation of British Bonsai Societies was over the moon with his gold medal. The majority of Bonsai exhibited on his stand were produced by amateur growers including members of the Swindon branch of the society. The aim of their exhibition was to demonstrate the pleasure that can be derived from growing and exhibiting bonsai. 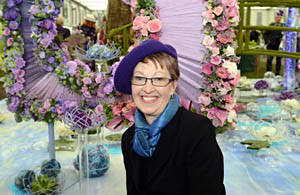 Bougainvillea specialists Westdale Nurseries were awarded a Silver-Gilt Flora for their eye-catching display of vividly coloured plants in the Great Pavilion and Bradford-on-Avon’s Shirley Preston was responsible for an equally eye-catching exhibit.  As RHS coordinator for the National Association of Flower Arrangers, she led her team to win a Silver-Gilt Grenfell for their entry: ‘ Inspired images create lasting impressions’.

Product of the year shortlister

The garden that the RHS judges voted to be the best this year was Cleve West’s Brewin Dolphin Garden. It featured  yew topiary, over 28 metres of beech hedging ranging from 2 ½ to 3 metres in height, and a mix of shrubs, perennials and annuals to contrast with the clipped forms. The colour palette included delicate whites, lime greens and yellows with splashes of reds and purples for contrast. The use of reclaimed limestone created an impressive grounding for the plants and it can be reused again after the show. 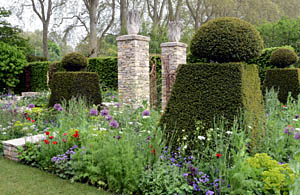 The beech hedge has already found a new home. It will be moved to Salisbury District Hospital where it will form part of Horatio’s Garden – a rehabilitation and memorial garden for 17 year old Horatio Chapple from Bishopstone who was killed by a polar bear in 2011. Cleve designed Horatio’s Garden at the Duke of Cornwall Spinal Treatment Centre at Salisbury District Hospital because it was a cause close to his heart – he had been to the centre regularly to visit his best friend who had broken his neck. It features a greenhouse and vegetable growing area to enable gardening to be used as part of patients’ rehabilitation therapy.

Cleve said “It was a happy coincidence that the hedging that we are using for Brewin Dolphin’s Chelsea Garden is the exact size required to screen the tennis court that stands adjacent to Horatio’s Garden. The beech hedging will help add to the intimacy of the garden as well as providing a habitat for birds and other wildlife.” 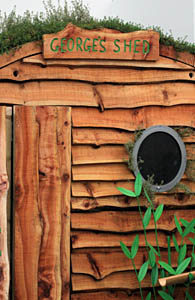 Horatio Chapple’s father David, who is the Consultant Spinal Surgeon at Salisbury and a Trustee of the Southern Spinal Injuries Trust (SSIT) added “This is an incredibly generous donation from Brewin Dolphin for which we are very grateful. It will make a huge difference to have the instant maturity of a Chelsea beech hedge in our garden. This is an important project for SSIT, the Spinal Centre, and for us as a family and we know that it will undoubtedly help improve the quality of life for those who face long stays in hospital following a spinal cord injury.”

A second teenager from the Salisbury area also had their life commemorated with part of a Chelsea garden. George Smith was a horticultural student at Sparsholt College when he died suddenly from heart problems. Fellow students honoured him by giving his name to the shed in their exhibit: ”The Space Race’ – maximum cropping from the minimum space. George’s Shed was created with a living roof of thyme, maximising every inch of space in the garden. The green roof acts as a natural filter for rainwater meaning that it significantly reduces the amount of rain drainage.

Scott Perkins, George’s best friend said “George was a great student and friend. He enjoyed all aspects of Horticulture and loved the Wiltshire countryside; taking photographs and walking along Salisbury Plain. The shed sums George up – it is strong, rustic, and we can just imagine him standing proudly beside it!”

The Sparsholt College garden won a gold medal and was voted Best Exhibit in the new RHS Environment category. 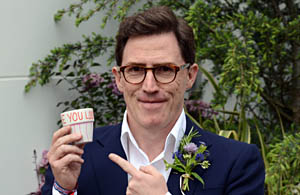 Celebrities such as Laurence Llewelyn-Bowen, Dame Judi Dench, Joanna Lumley, Joan Collins, Rob Brydon, Pixie Lott,  Raymond Blanc and Joe Swift each decorated pots in their unique style. One actor asked to decorate a pot was Christopher Biggins. The ex-Salisbury resident and Chelsea regular was only too pleased to help. His design featured blue flowers, red flowers and a cheerful bright yellow sun. 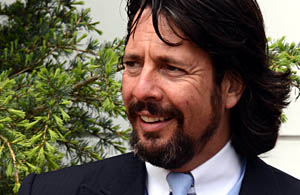 Painting the pots was all for a great cause. Laurence Llewelyn-Bowen said “Painting the little pot was an absolute pleasure, and I’m so pleased that all the money raised from the auction will be going to the Royal Horticultural Society initiative – Campaign for School Gardening. Already, the RHS are helping 15,000 UK schools use a garden as a teaching resource, meaning millions of children are learning important lessons in a fun, practical way – so I hope the extra money will allow the charity to carry on doing this fantastic work.”