The RHS Chelsea Flower Show centenary was a chance for Wiltshire horticulturalists to shine. When the medals were handed out, Wiltshire took home the gold.

Michael Balston  and Marie-Louise Agius of Balston Agius in Devizes were awarded  gold for the East Village Garden – a beautiful show garden on Main Avenue.

It celebrates the creation and delivery of East Village – the first legacy neighbourhood to result from the London 2012 Olympic Games.

Curving lines and leaf-forms respond to elements of the Olympic Park, and local references are picked up in the boundary, structures and planting. The balcony-like chevrons overlooking the garden evoke the ‘designed for living’ concept of the village with views onto green space.

The focus of the planting is on shrubs, textures and foliage, and this is realised through the use of plants such as rhododendrons, Enkianthus, Ceanothus, Pittosporum, Vibernum and ferns. These are off-set against an herbaceous palette. 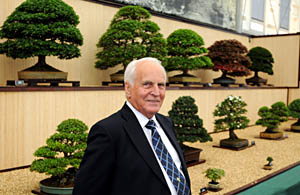 Michael Balston, a resident of  Wiltshire since 1983, is no stranger to Chelsea success. He designed his first  Show Garden at Chelsea in 1985 for Vogue and was awarded a Silver-Gilt medal. He returned in 1986 to create a Gold medal-winning garden for Faberge and again in 1999 where he was awarded a  Gold medal for the garden he designed for The Daily Telegraph, going one better this time and also picking up the accolade ‘ Best Show Garden’. 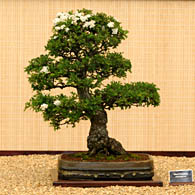 It wasn’t just the Show Gardens where Gold’s were won. The Grand Pavilion had its stars too. The Federation of British Bonsai Societies took home a gold, as did the National Association of Flower Arrangement Societies for a stunning display ‘Far Below the Sea Blooms”. Vibrant, bold colours juxtaposed alongside subtle tones and tints of plant material.

The neat bonsai were no less impressive. They took many years to nurture. Reg Bolton from The Federation of British Bonsai Societies explained that the hawthorn in the centre of the display was around 20 years old. “It was taken from an immature plant found struggling at the side of the old Swindon to Marlborough railway. It was made into a bonsai by pruning, potting and styling. If it was put in the ground, it would revert back to its normal state”, he said. 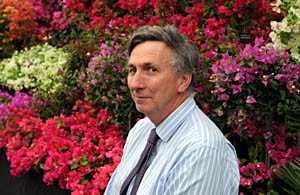 Wiltshire exhibitors also picked up a few silver awards. Silver-Gilt Flora awards was won by The Botanic Nursery of Melksham for their display of early flowering foxgloves and a Silver Flora was won by Westdale Nurseries of Bradford-on-Avon for their brightly coloured bougainvilleas.

Flower arranger Michael Bowyer from Salisbury also did well in the medals. He picked up a Silver-Gilt Flora for his arrangement in the Open Space category.