Wiltshire charity Help for Heroes exhibited their first ever RHS Chelsea Flower Show garden and they went in big with a show garden. Liked by the judges, it was awarded a Silver-Gilt Flora. It was also the favourite show garden of the public and it was voted the People’s Choice. 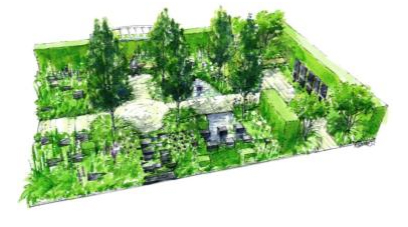 Their Hope on the Horizon garden, designed by 29 year old Matthew Keightley represents the complex and progressive path towards recovery experienced by wounded, injured and sick personnel, veterans and their families. The Help for Heroes ethos is to inspire, enable and support those heroes during their recovery and to draw inspiration from their journey from damaged and distressed beginnings, to strong and confident hope-filled futures.

Granite blocks represent the soldiers’ physical being and the planting represents their mental being. Both evolve through the garden from a rough, unfinished, over-grown beginning through to a perfectly sawn, structured end.

An avenue of hornbeams draws the attention through the entire garden to a sculpture resembling a hopeful horizon; a reminder to the soldiers that they all have a bright future ahead. As well as areas to recline and reflect, the garden offers focal points all the way
through. 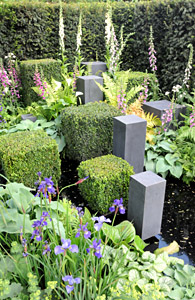 Cool, calming colours are used throughout, helping to emphasise the fact that it will be a serene, contemplative space. The planting will flow from white through to blues and purples, using such plants as Acanthus mollis, Agapanthus ‘Peter Pan’, Digitalis purpurea, Geranium ‘Johnson’s Blue’, Helleborus argutifolius, Lupinus ‘Gallery Blue’, and Tulipa ‘Double Maureen’. Structural specimens, such as Carpinus betulus ‘Fastigiata’ and Buxus sempervirens, will represent the soldiers’ regimented nature.

After the Show, the garden will be moved and set within the grounds at Help for Heroes Chavasse VC House in Colchester, Essex. The garden will offer a serene, peaceful haven to contemplate and inspire a bright future and to support the challenging journey to recovery.

The concept was inspired as a result of Matthew’s brother’s involvement with the armed forces, having served on four tours to Afghanistan and due for his fifth next year. This, paired with his admiration for the work Help for Heroes do, was the starting point for his design work. 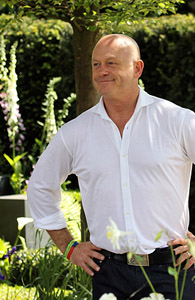 Actor Ross Kemp, a patron of the charity, visited on press day. He said of the garden: “I think it’s got a lot of symbolism and methodology behind it but it’s not in your face. I think Mathew’s done a very very clever job but it’s a bit like help for Heroes in itself – it’s very simple, very straight, very obvious charity that does a lot of good and I think this garden will do a lot for people because it’s somewhere for people to have a tranquil time to think and to contemplate and whether your’re out on the ground or related to someone who’s been out on the ground because of the trauma that that can cause I think everybody sometimes needs somewhere quiet to go and contemplate. Matthew’s done a brilliant job. There’s also a lot of thought behind it in terms of Hope on the Horizon. If you look at the bricks at the front – the blocks are rough and as you go to end of the garden they become smoother and smoother and I think that’s the idea of transition in people healing and getting better and having hope.”

His favourite area is the seating with three colours representing the three different services.

Matthew Keightley said:  “I think if I’m honest it’s probably better than I expected. I like to think that I’ve got good vision but I didn’t know it was going to turn out this well and it’s not until you have the full scale of the trees and you put it all together that you realise how it’s going to work so I’m absolutely thrilled.

In terms of being at the show I think it’s hugely important that although they’ve got a very high profile, it remains, because we’re drawing out of Afghanistan and the last thing they need is for people to think they don’t need to continue supporting them. The recovery process goes on, will go, on for years and years after the war’s over so that’s crucial and hopefully this will help them. After the show’s over this is going to be used for recovery so it’s getting moved up to one of their recovery centres so I think really it’s going to benefit the troops and Help for Heroes in a big big way which is what I always wanted to do.” 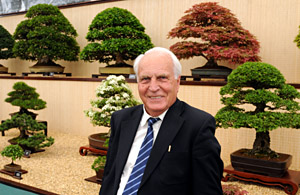 It’s not just show gardens though – there’s plenty going on in the Great Pavillion with Westdale Nurseries (bougainvillea specialists) who were awarded Silver Gilt,The Botanic Nursery (holders of the national collection of foxgloves) who won Gold and the Federation of British Bonsai Societies who also won Gold.

The bonsai all have a story behind them but Reg Bolton from the Federation of Bristish Bonsai Societies told us about one from Swindon. “The pyracantha bonsai came from Lower Stratton. It was growing up against a garage wall like an ordinary garden plant. It was dug up and re-trained as a bonsai and has taken 15 or more years to get how it is now. It’s a very nice piece,” he said. 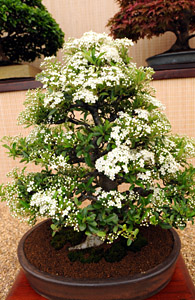 Wiltshire connections at the show: