The streets of Wootton Bassett were lined, not for a repatriation this time, but to welcome HRH The Princess Royal for a very special ceremony. Her Royal Highness was there to unveil the Letters Patent on behalf of her Majesty the Queen that honours the people of Wootton Bassett.

For four years, the people of the town marked the repatriations of fallen servicemen and women as their coffins were brought through the High Street. Never formally organised, the people stopped their daily lives on 167 occasions to pay their respects. They have now been recognised with the highest possible honour and the town can now call itself Royal Wootton Bassett. 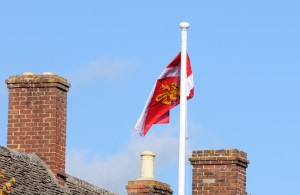 It is only the third town in Britain to have such an honour, and the first for over 100 years. The town has a new flag with a golden lion (a symbol of royalty dating back to medieval times), new road signs, and a new cake – The Bassett Crown. The Mayor of Wootton Basset, Paul Heaphy, said that the new motto for the town would be “we honour those who serve.”

To mark the occasion, shops and businesses on the High Street decorated their buildings with Union Jack flags and the street was swept and made ready for the ceremony in the afternoon. 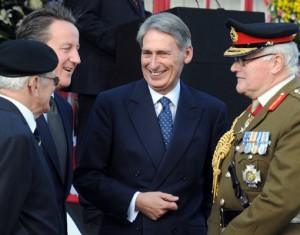 A tri-Service parade marched through the street for 355 paces – one for each of the people who have been repatriated through the town and nearby RAF Lyneham. A specially composed march composed by Captain Pete Curtis RM was played.

British Legion members, the town band and the town crier, Owen Collier, all had a part in proceedings, as did an RAF C17 Globemaster, a Hercules C-130J (which both played a prominent role in the repatriation of fallen Service personnel) and a Vulcan Bomber. 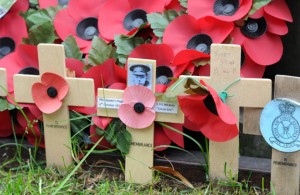 The princess said “This community has come together in the most extraordinary way. I am privileged to be allowed to add my thanks to those of Her Majesty and the whole country for the example you set in respecting with dignity the losses that this country’s operational responsibilities have forced upon us.”

The people of Wootton Bassett were proud to accept their royal recognition, but never far from everyone’s mind was the fact that the privilege of Royal status was because of the high price paid by our armed forces.

(The March, by Captain Pete Curtis RM is available as a CD from The Royal Marines Band Service and can be downloaded from iTunes with the proceeds donated to the Royal Marines Charitable Trust Fund).