A meteorite so heavy that it would have taken 4 people to move it was used as a door stop at a house in Wiltshire.

Since the early 1900’s successive owners  at Lake House in Wilsford-cum-Lake (near Salisbury) had paid little attention to the  90kg meteorite but it is now believed to be the largest ever to fall in the UK.  The next largest meteorite is only around quarter of the size.

Scientists at The Natural History Museum in London looked at the specimen in 1991 and confirmed that the rock had come from space but they could not pin down where it had fallen. 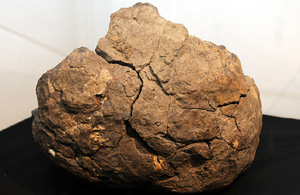 Researchers now think that it landed on nearby Salisbury Plain some 30,000 years ago which makes the rock a significant find. Colin Pillinger, Professor of Planetary Sciences at the Open University has said that he is 99.9% sure the rock fell in the UK and that it fell on or near a glacier.

The high iron content of meteorites mean that they fall apart as they oxidise. The theory behind why such an unstable meteorite is still so large is that the glacier conditions protected it .

It is believed to have been found on by druids that used it in a chalk burial mound (also an environment that would have protected the stone). It could have come to be at Lake House when Lt Col Frederick George Glyn Bailey (then owner of the house) excavated the mound on Salisbury Plain .

The meteorite can be seen in the autumn at Salisbury and South Wiltshire Museum.