The 2012 Ageas Salisbury International Arts Festival will be held from Friday 25 May – Saturday 9 June.

This year’s programme focuses on the themes of the vibrant culture of Brazil, Fire and Celebration and as 2012 marks the Festival’s 40th Year it will also focus on the Queens Diamond Jubilee. Events will take place in traditional and diverse spaces across the region such as Salisbury Cathedral, Danebury Hillfort, Stonehenge, Hudson’s Field, the Wardrobe Museum Gardens and Trafalgar Park.

Festival Director Maria Bota, said: “In 2012, Salisbury’s 40th Festival offers you the opportunity to savour world-class artists from the diverse fields of music, theatre, dance, film, visual arts and outdoor spectaculars, with three themes woven through the programme: Brazil, Fire and Celebration. Our wonderful landscape offers magical settings for the Festival to entertain, inspire and transform our lives”.

Opening with a bang 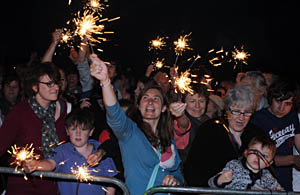 The Festival opened with a fiery bang at Hudson’s Field as world-renowned French company Les Commandos Percu brought the magic of music and flames to Salisbury, astounding and delighting the audience. Starting off in the crowd, the drummers played ryhthmic beats as they picked out their firey passage to the stage. The sound of their specially designed instruments constantly built the atmosphere as fireworks were set off as they played.

The crowd were thrilled to be given sparklers to join in the show. Hundreds of pretty yellow sparks could be seen all along the front few rows and there were delighted faces, both young and old.

The masters of pyrotechnics and percussion moved back to the stage to build up to their finale – a sky lit up with fireworks, sparks, red smoke and the band of drums and pyrotechnics. Many said it was the best opening night they had seen.

This event was free. 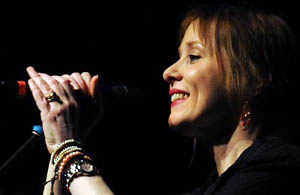 Salisbury Live took place on the first weekend of the festival. The pubs of Salisbury showcased hundreds of musicians with everything from rock, jazz, hip hop, folk and blues.

More famous faces were also in town. Suzanne Vega, widely regarded as one of the best songwriters of her generation, played at Salisbury City Hall. Accompanying herself on the acoustic guitar, she conveyed deep emotion as she sang songs with lyrics created by a masterful storyteller. Wearing a top hat she sang ‘Marlene on the Wall’ (a song about Marlene Dietrich) and then other favourites such as Luka and Tom’s Diner.

Joan Armatrading also appeared at Salisbury City Hall. The three times Grammy nominated British singer songwriter has stood the test of time and she delighted the audience with well known songs such as ‘Willow’ and ‘Love and Affection’.

She played the acoustic guitar and also sang songs from her new album ‘Starlight’.

Following the performance, Joan met her fans and signed CD’s. 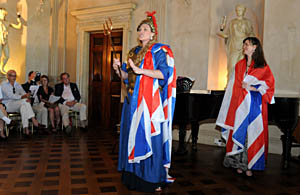 The intimate venue seated just 100 people and the acoustics of the baroque interior made for a wonderful event.

The  finale involved audience participation. Catherine made her entrance as Brittania for a rousing performance of Rule Brittania to close the Diamond Jubilee Themed performance.

There was plenty of art at this year’s festival including Brazilian Street Art from Chivitz and sculpture from Ana Maria Pacheco.

His work has been seen on the streets of Sao Paulo for many years and he has a strong following.

Working in Salisbury Arts Centre he could be seen creating murals of his colourful characters with spray paints. 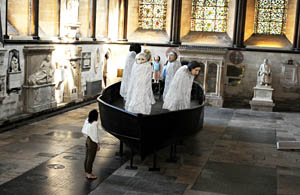 Ana Maria Pachecho brings a different art form to the festival. Two striking pieces have been installed in Salisbury Cathedral – The Longest Journey and Memoria Roubada.

There’s no missing The Longest Journey. A 32 foot Broad cruiser is adrift in the North Trancept of the cathedral. Five huge white-robed figures stand at the prow of the boat as others, including a small boy. contemplate their fate.

Memoria Roubada is a shocking piece located in the Morning Chapel.  A cabinet contains six disembodied heads all looking at the pierced heart on the floor before them. Wording on the cabinet is by Brazilian Poet Jose Lobo describing the fate of the victims of colonisation, including poked eyes and severed hands.

Fire was a 12 minute piece on Chorister’s Green. Performed by fire artists, an ensemble of horns and Salisbury Community Choir, Fire was a spirited meditation on man’s enduring fascination with fire. It was based on a collage of text’s, including Fire from poet Vikram Seth.

Festival goers were also treated to a World Première Festival commission “The Walk From the Garden“, with original music composed by Jonathan Dove who collaborated with librettist Alasdair Middleton to create a new church opera for over 200 voices. 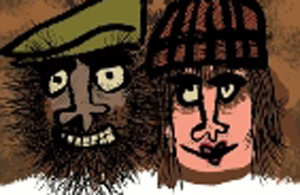 Family Friendly events included The Twits, set in the glorious setting of the Museum Wardrobe Gardens and Little Red… You Know Who! which was a spell-binding play for young children, following a magical path through the woods.

The Festival will end with the much loved Party in the Close, a fantastic evening for all the family with live music from three bands including the well-known Ragu Dixhit, culminating in spectacular choreographed fireworks set against the backdrop of the stunning Salisbury Cathedral.

For a full programme, download the Festival brochure at www.salisburyfestival.co.uk