Royal seal on the unopened box

On June 28th at the Chalke Valley History Festival, Lady Emma Kitchener will be opening a sealed packing case which has remained untouched since the start of the First World War.

The unopened carton, contains eighty new and unused brass Princess Mary gift boxes, to be sent as gifts to the soldiers on the Western Front in Christmas 1914. The box was found in Ireland having, for some unknown reason, never made it to its destination. It is tied with knotted course string, with a lead seal embossed with the letter “M”, which stands for Princess Mary, the daughter of King George V and Queen Mary. Nothing is certain about the contents of the gift boxes, but from x rays it appears that each contains a bullet pencil, and it is likely that they will also contain either cigarettes and tobacco, or boiled sweets, plus a card from the Royal Family. 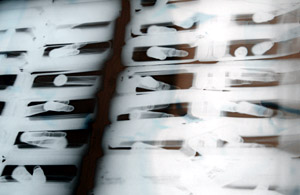 X-ray of the contents

It is fitting that Lady Emma Kitchener, who is the great great niece of Earl Kitchener of Khartoum (whose face was made famous on the First World War recruitment poster ‘Lord Kitchener Wants You’), has kindly agreed to open the packing case. It will be the first time that this crate has been opened for nearly 100 years. She will do so in front of one of only three surviving ‘originals’ of that iconic poster, which will be displayed as part of the ‘Great War Poster Exhibition’ at the Festival, featuring ninety posters from the Maxted Collection.

James Heneage, co-Chair of the Daily Mail Chalke Valley History Festival, said: “This will be one of the most exciting of our many time it was expected that the War would be over by early 1915.

The response was truly overwhelming, and it was decided to spend the money on an embossed brass box. The contents varied considerably; officers and men on active service afloat or at the front received a box containing a combination of pipe, lighter, 1oz of tobacco, and twenty cigarettes in distinctive yellow monogrammed wrappers. Non-smokers and boys received a bullet pencil and a packet of sweets instead. Indian troops often got sweets and spices, and nurses were treated to chocolate. All boxes, irrespective of recipient, contained a Christmas card and a picture of the Princess.

A small number of these Princess Mary gift boxes will be offered for sale at the Festival, with a percentage going to military charities.