New arrivals a handful for keepers at Longleat’s Jungle Kingdom

Keepers at Longleat’s Jungle Kingdom have got their hands full looking after their newest arrivals – a quartet of rescued boa constrictors with a total length in excess of seven metres.

The four giant snakes, the largest of which is called Zeus and measures 2.2 metres in length, were all re-homed at the Wiltshire attraction after being rescued by the RSPCA.

Boas use constriction to kill their prey, coiling their body around their victim and slowly crushing the life out of them.

If the meal is particularly large, the snakes can make use of their specially adapted jaws – known as reticulated jaws – which can literally dislocate to allow the snake to get its mouth around the unfortunate prey.

In addition to the snakes, keepers are also having to handle another new arrival carefully – in the shape of a rescued striped skunk called Oreo. 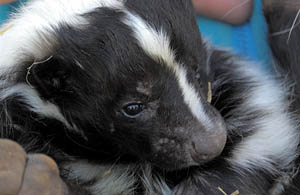 The skunk was originally kept as a pet and when it arrived at Longleat was significantly overweight.

Keeper Rebecca Earner said: “When we first got Oreo he was quite nervous and also not in the best of health.

“We estimate he is around two to three years old and had been kept by someone as a pet. Recently skunks have become popular for people to keep at home but they need lots of attention and special care which make them difficult to look after properly.

“It has taken a lot of time and patience but Oreo is now a much fitter and happier skunk. His weight is down to just over six kilogrammes and he has settled in really well to his new home here,” she added.

Found throughout the USA and southern Canada, skunks are notorious for their use of ‘chemical warfare’ to ward off would-be predators and other potential threats.

They can spray a noxious substance from special glands which can travel up to three metres and causes a deeply unpleasant smell which can cause nausea.