Steve Backshall attempts the traverse wall in the Deadly Challenge

Longleat Safari & Adventure Park invites visitors to face the ultimate test of their mental and physical abilities when they try out the brand-new Deadly Challenge attraction which opens this week.

Located next to the park’s Adventure Castle, the Deadly Challenge is made up of six themed zones focussing on different animals’ deadly skills– the Venom Zone, the Power Zone, the Superpower Zone, Agility Zone, Ambush zone and the Speed Zone.

Longleat’s Steve Mytton said: “Each Challenge tests a different set of skills in a fun and highly-interactive way – it’s not all about brawn as brains are also extremely important, as well as reactive and observational skills.” 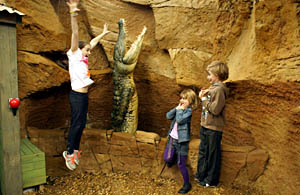 Children take part in the Deadly Challenge in the Ambush Zone

Starting at the Deadly Challenge Mission Control, visitors will receive a Deadly briefing video from Steve Backshallhimself. They will then have to put their skills to the test in a series oftimed challenges to find as many deadly creatures as possible throughout the Deadly Challenge. At the end of each challenge, visitors will be given a skull rating to determine their overall ‘Deadly’ rating at the end of the game.

“The new Deadly Challenge is just one of a brand new series of Deadly experiences and events which are happening at Longleat,” said Steve Mytton.

“You¹ll be able to get a full appreciation of some of the skills these Deadly animals have; from the ambush abilities of the Nile crocodile to the incredible power of a polar bear and the awesome speed of a cheetah!

“These challenges will give people the opportunity to experience, for a few minutes of their life, what it’s really like to be one of these animals. To strike like a rattlesnake, climb like a gecko and swing through the trees like a monkey,” he added.

The Deadly Challenge is the latest addition to the Deadly Adventure at Longleat, following on from the opening of the Deadly Safari at Easter. It’s the start of a four year partnership with BBC Worldwide, which transforms areas of the park in the style of the BBC’s Deadly branded programmes which include Deadly 60; Deadly Top 10s; Deadly 360; Deadly Art and most recently Deadly Mission Madagascar as seen on CBBC.