Following on the heels of last summer’s discovery of a coastal sea fern-grass thriving along a main road in Wiltshire, experts are now abuzz with yet another first for the county. A rare squash bug, commonly known as a Box Bug (goncerus acuteangulatus), has been spotted. Its common name comes from its main food source, the Box tree.

Wiltshire and Swindon Biological Records Centre spokesperson, Vicki James, said “I can’t believe we’ve done it again! Another new species in Wiltshire is really exciting news. People might expect this rare find to have been seen somewhere remote, miles from any urban development. But this was found in the centre of Melksham, on Wiltshire Wildlife Trust’s Conigre Mead nature reserve. Like the discovery of the sea fern-grass, it demonstrates that anyone can find a rare species, regardless of where they look.” 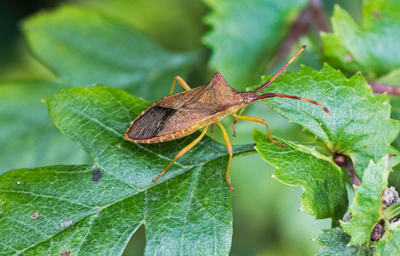 The discovery was made by Gill Cardy, a volunteer warden at the reserve. Gill commented “It’s thrilling to have found such a rare bug right on our doorstep. We run regular workshops at the reserve, on lots of topics to help people learn more about the natural environment, such as plants, bugs, birds. If people know what they are looking at, they are more inclined to feel connected to their local reserve. We were conducting a workshop on plant identification when I spotted the Box Bug. I was excited, took some photographs and sent them in to be identified. I was delighted when it was confirmed as such a rare bug.”

The Box bug was originally only found in Box Hill, Surrey but is believed to be expanding across the south east. As shown by this latest discovery, is now making its way south west, as well as developing a taste for new food sources such as Hawthorn, Buckthorn and Yew trees.

Conigre Mead is a popular local space which boasts beautiful grass meadows, home to a large number of butterfly and dragonfly as well as water shrews and even grass snakes.

Vicki, Data Officer for the WSBRC, explained “Finding this Box Bug really demonstrates that you don’t have to live out in the countryside to find something exciting. You can find all kinds of fascinating wildlife wherever you are. I hope that this find, and the discovery of the rare costal plant along the A30, will encourage people to get out and look, and let us know what they see and where. It couldn’t be easier to report a sighting. Just log on to our website – www.wsbrc.org.uk, click on Submit Records and fill in a simple form. The site will also give you ideas of what to look for at any time of year. “

Wherever you live in Wiltshire, you are not far from a wildlife reserve. To find your local reserve, learn more about wildlife, and events like those being held at Conigre Mead, in your local area, log on to Wiltshire Wildlife Trust’s website.