The new £27m visitor centre at Stonehenge is now open. It was built to “restore the dignity” of the monument by allowing the stones to be viewed in a clutter-free environment.

The revamp included closing and removing a section of the A344 road and siting the centre over 2km away from the stones themselves.

Designed by Denton Corker Marshall, the structure is full of natural light. 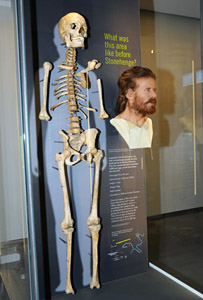 The centre features an exhibition of 250 prehistoric objects – many that have never been seen before unseen. One of the highlights includes the reconstructed face of a 5,500 year-old man who had been buried in a long barrow close to the stones. The skeleton is along side.

Another is the projection of Stonehenge onto two curved walls which show the monument in different seasons and through the years.

More than 250 exhibits are on display at the new visitor centre. They range from 14th Century manuscripts to Roman coins and replica arrowheads found at nearby Durrington.

“We now have something that I think is worthy of one of the world’s greatest archaeological sites,” said Simon Thurley, chief executive of English Heritage.

Around one million people visit the site every year, from all over the globe.