It’s very early in the morning and much clattering and banging is going on in the village of Great Wishford. But it’s nothing unexpected – it’s the traditional start to Oak Apple Day.

The 29th May is a special day for the villagers because it is the day that they re-assert their rights to collect wood and rear cattle in Grovely Wood which is owned by The Earl of Pembroke.

The Rough Band start the day off by walking around the village making as much noise as possible to rouse everyone. They blow trumpets, ring bells, bang dustbin lids and chant “Grovely, Grovely, Grovely and all Grovely’. They then head out to the wood to cut branches for their houses. The best boughs are displayed in the village for judging and an extra special bough is hoisted to the top of the church tower.

Villager Chris Miller said “In the morning the villagers go out and cut branches and bring them back for display in the hope of winning a prize. Boughs are judged on the way they look – if they have oak apples on and if they resemble a deer’s antler.”

The oak apple is caused by the oak apple gall wasp (Biorhiza pallida). The female lays an egg in a leaf bud and the chemicals produced by the larvae cause the tree to produce the gall.

The winner of this year’s Best Bough competition was Janice Kellow. 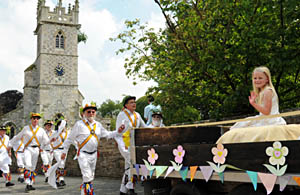 To formally re-assert their rights, representatives from the village have to go to Salisbury Cathedral. First, the four Nitch Ladies dance outside the north Porch. Nitch refers to the bundles of dry wood that they carry which are symbolic of their ancient rights in Grovely Wood. The dancers were wearing early nineteenth century costume – a black skirt, white blouse and bonnet and a beige apron and the dance was a traditional village dance.

Inside the cathedral a service took place, led by Canon Chancellor Edward Probert. He read out: “We are claiming again for the coming year the rights held by the villagers of Great Wishford to collect fallen branches from Grovely Wood…We also have the right to cut live boughs on the 29th May with which to decorate our houses. These rights are generally agreed to have existed from at least the 12th century and were formally incorporated into a charter in 1603.”

The whole of Great Wishford School attended the service this year; something that has not happened for many years. It was particularly special because the 29th May fell on Whit Tuesday, the day  mentioned in the charter as being when people from Great Wishford came annually to the cathedral. It was also special because it was the 120th Oak Apple Day since the formation of the Great Wishford Oak Apple Club which was created by villagers to promote and safeguard their ancient rights.

Once the villagers have formally proclaimed their rights, they head back to Great Wishford for an afternoon of celebrations. 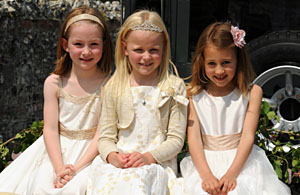 The boughs are carried in procession around the village and this year the May Queen Jessica Shergold and her attendants Nancy Humphrys and Chloe Lyttle headed up the parade, followed by the Bourne River Morris Men, the Nitch Ladies, Great Wishford School and a variety of fancy dress floats.

The procession ended in the Oak Apple field where there was dancing from the Nitch Ladies, the Morris men and the school children who danced around the Maypole.

The prize for the best adult float went to ‘Lympics’ and the best children’s float was Great Wishford Pre-School. Best dressed adult was Sarah Grearson and best dressed child was Arly Ramilee.

The villagers also dress their houses for the occasion and this year there were some excellent scarecrows. The prize for the best one went to the Gurd family for ‘Rapunzel’.

View photos from the day