Pigeon Whistles is a performance by Pigeon Pete and Nathaniel Mann and was shown at the Ageas Salisbury International Arts Festival. It was part of the Oxford Contemporary Music Audible Forces event.

“I wondered what they would sound like so set about making some myself.”

The stars of the show are a small flock of Birmingham Roller pigeons that have been trained to return to their Polka-dot Pigeon Loft.

For the performance, the birds are released from their base and as they fly around, the wind sounds in their whistles and makes for an interesting audible experience.

The Pigeon Whistles were inspired by ancient Chinese pigeon whistles in the Pitt Rivers Museum where Nathaniel is the Embedded Composer in Residence. 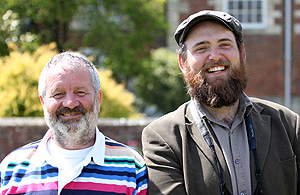 Nathaniel said: “I wondered what they would sound like so set about making some myself.”

“It was a gradual process of prototyping and I tried a variety of materials,” but the design used for the Salisbury performance was “a 35mm film tub, a lolly stick and a bit of a Chris de Burgh record!”

The size the film pot is cut down to makes a big difference in the sound, as does the size of the hole cut into it. Different sounding pigeon whistles are made to make the collective sound more interesting.

They are attached to the tail feathers of the pigeon and are light weight enough not to impede flight.

The birds flew up in Choristers Green against the backdrop of the tallest spire in England (Salisbury Cathedral). The sound was quite unique as the birds circled their loft.

Because Pigeon Pete trained the birds to recognise polka dots as their base, they know where to come home to and can they can easily recognise the pattern from the air – useful when their home moves around the country. They also use an Indian Fantail pigeon as encouragement to come home.

The pigeon whistles are still being refined but the hope is to eventually have them fine tuned enough and the birds in flight long enough to have a performer sing in harmony with them which will be quite something!

To find out more about Nathaniel’s progress, read his blog at http://pittriversmann.blogspot.co.uk/