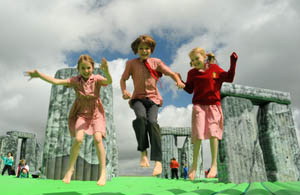 Alexia, Oscar and Ciara from Pewsey

Originally created by the artist  for the Glasgow International Festival of Visual Arts, the 20ft-high inflatable took two months to make  using detailed plans of the world Heritage monument on Salisbury Plain.

Following the Glasgow Festival, Sacrilege was commissioned to tour 25 locations across the country as part of London 2012 Festival.

The bouncy Stonehenge was a great hit in Marlborough with both young and old having a go. 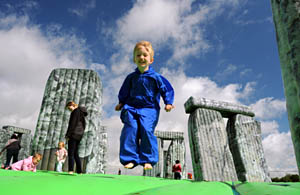