ABF, The Soldier’s Charity and Salisbury-based Help for Heroes benefited equally from the event which took take place on 6th December. It raised over £30,000. 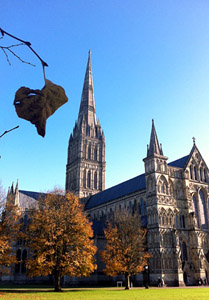 Stars such as actors Emilia Fox, her father, Edward Fox OBE and David Oakes supported the event by giving readings.

Oakes, who used to be the head boy at Salisbury grammar school Bishop Wordsworth’s explained why he supported the event: “My uncle and his uncle were both in the RAF and there’s a military strain to my upbringing  -we spent time on military bases as we were growing up.”

It’s always been fascinating to me as a boy – there’s something about the army being a boy that’s  always intriguing but I think the reason why I’m here specifically is I think the armed forces often fail those when they leave the service, whether its through injury or just through retirement, and I think it’s important that there is a structure to rehabilitate and to reintegrate people into everyday society post serving and if our government and our military isn’t good enough at doing that then it’s the point of charities to come in and help along that way because it’s such a different lifestyle to normal reality and so hard to get your bearings when you come out of it.”

The music included The Band and Bugles of The Rifles, the Salisbury Plain Military Wives Choir and of course the angelic voices of Salisbury Cathedral Choir. Traditional carols were sung by all including Once in Royal David’s City.

Chelsea Pensioners were on hand at the doors to help collect money for the two charities.