Solstice Signifies That 2012 Will Be a Good Year

Druids and pagans were among those gathered at Stonehenge on Salisbury Plain to celebrate the sunrise on the shortest day of the year. 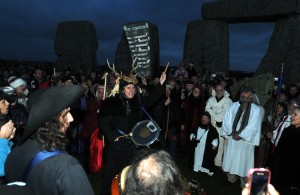 The weather was unseasonably mild which brought out record numbers of people who were rewarded with a beautiful sunrise over the ancient stones.

Arch druid of the standing stones in Wiltshire, Rollo Maughfling, said that 2012 will be a good year: ”Just as the ceremony came to an end the sun came over the horizon, it was excellent. It has been a very jolly occasion. It’s a good omen for the year ahead.”

The actual winter solstice occurred this year at 5.30am on 22 December and from that date on the daylight hours increase until the summer solstice is reached.