Salisbury based charity Trussell Trust and international arts organisation Wild in Art have created a large scale public art event in Salisbury for the summer of 2015. The event features 25 sculptures featuring individually designed artworks on a bespoke baron sculpture in the style of a Lewis Chess Pieces (created by Wild in Art Artistic Director Chris Wilkinson) and commissioned to celebrate the 800th anniversary of the Magna Carta.

Each sculpture is decorated by local artists and communities – many have been designed to celebrate Salisbury’s rich cultural and heritage offer, highlighting its historical gems and celebrating the fact that one of the original copies of Magna Carta is housed in Salisbury Cathedral.

The event has been planned to encourage people to be ‘tourists in their own city’ but also to invite visitors to explore the beautiful city of Salisbury.

This event creates huge civic pride and showcases Salisbury and the Trussell Trust around the world through the bringing together of many sectors to create a mass participation public art event that, in turn, will bring significant economic, social and cultural benefits to the city. 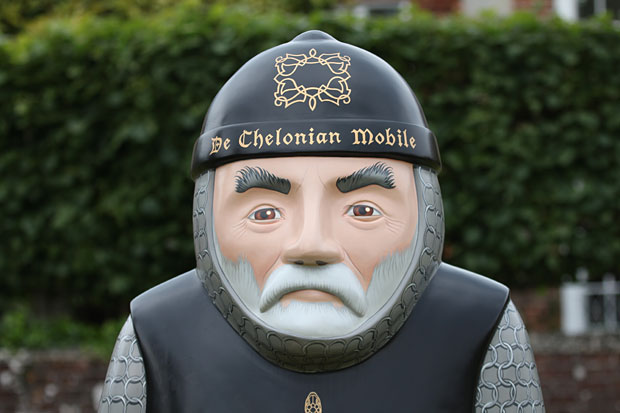 Ultimately, the sculptures will be sold in an auction on October 1st in Salisbury Cathedral to raise significant funds for Trussell Trust ensuring a fitting legacy to help raise money to support UK people who are struggling to feed themselves via the 413 food banks that the charity supports nationally.

Mark Ward, Project Director and Head of Fundraising for Trussell Trust said: “The Trussell Trust has been part of Salisbury’s life for 17 years. We want this event to benefit the people of Salisbury and the business community based here.”

Running alongside the main event is an education programme, giving local schools and community groups the opportunity to decorate smaller versions of the baron sculpture.

Where to find the barons:

View photos of the 25 barons on the trail

1 Conradin by Patricia Shrigley – Conradin is a medieval name meaning ‘bold counsel’ which is fitting for a Magna Carta project. Sponsor – Salisbury Cathedral

2 MC 800 Baron by Mark Elling – to merge 2 design aesthetics that span the 800 years between them. Sponsor – Magna Carta 800th Trust

3 Quintissentially British by David Graham – to celebrate everything British from food and drink to the weather. Sponsor – Investec Asset

4 Astro Baron by Jenny Leonard. Inspired by what veriety of crazy job uniforms the Baron could be put in. Sponsor – Leo, Elliot and reuben

6 Hello Kitty Baron by Patricia and Maria Shrigley. Celebrates the Hello Kitty brand with a strong social message promoting small acts of kindness, a message that fits
with The Trussell Trust

11 King of Hearts by Laura Fearn – to portray the Baron as the King of hearts from Alice in Wonderland. Sponsor – The radnor Charitable Foundation

14 Looking Forward Looking Back by Kath Hudson – to show images of the interior of Salisbury Cathedral looking both East and West. Sponsor – Magna Carta 800th Trust

17 Oh Deer! by Annaliese Stoney. Plays with the idea of past meeting present. From the deer legend of the founding of the current cathedral site to the peregrines
nesting on the spire. Sponsor – anonymous

18 The Magna Carta Baron by Donald Brown. commemorates the 800th anniversary of the sealing of the Magna Carta. Sponsor – anonymous

19 The Tree from the Garden of Life by Susan Francis and Morning Star Clients. A symbol of hope and renewal. Morning Star is a Salisbury charity offering support and
rehabilitation to the homeless and those recovering from addiction. Sponsor – The Trussell

20 Busy Bee by James Kent. Sometimes we can be busy as a bee and not take the time to enjoy what is around us. Sponsor – The J P Marland Charitable Trust

The official launch event of The Barons’ Charter took place on October 2nd 2014, in The Chapter House in Salisbury Cathedral, home of one of only 4 remaining original copies of this hugely important document.

Representatives from Salisbury’s business, civic, community, artistic and education sectors were all  present to see the unveiling of the sculptures used for the trail.

The first artwork commission was on show with artist Jodie Silverman finishing off her design live before the guests. She said of her design, “I am delighted to have been asked to paint the first sculpture for the Barons’ Charter. My design references the influence that Magna Carta has had on the world, there is symbolism referring to its influence on the legal system, in particular the US constitution and we design will include the words ‘ideals of democracy, limitation of power and freedom under law.’ It also represents the notion that the pen is mightier than the sword.

I include a giant cedar tree to represents the roots of justice and the cedar tree is one of two ancient trees which grow in the cloister of the Cathedral. I also wanted to acknowledge the city, its world renowned monuments and some of the diverse wildlife on Salisbury plain, which is the largest remaining area of calcareous grasslands in NW Europe, an important conservation area and valuable habitat for birds and insects.

I include The Poultry Cross, surrounded by buildings which are characteristic of the town centre. Old Sarum surrounded by patchwork fields and Stonehenge framed by a beautiful sky.”