Visitors to the Salisbury Museum this summer will be treated to a highly original and fascinating exhibition on JMW Turner. Newly discovered facts and a wealth of material never previously assembled together will revise the traditional outline of Turner’s formative years.

‘Turner’s Wessex: Architecture and Ambition’ will reveal new insights into Turner’s ambitious and innovative work as a very young man and his complex relationships with extremely wealthy patrons. “We are astonished to discover that Turner began his career here in Salisbury, painting the town, its magnificent cathedral and the extraordinary Fonthill Abbey nearby,” said Adrian Green, Director of the Salisbury Museum. 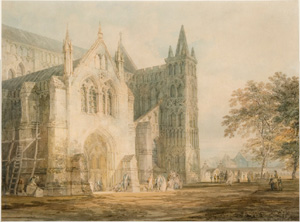 Building on recent successes with Constable and Cecil Beaton exhibitions, the Salisbury Museum will showcase J.M.W. Turner’s meteoric rise at the turn of the nineteenth century, working for two of England’s wealthiest men as they embarked on extravagant building projects and historical research on a very grand scale in the Wessex region.

Salisbury is likely to be a magnet for visitors throughout 2015, as across the green from the museum at Salisbury Cathedral the Magna Carta celebrates its 800th anniversary. Exceptional National Trust properties such as Stourhead will be open to visitors nearby, and 20 minutes away the ancient monument of Stonehenge continues to cast its mysterious spell.

Turner first visited Salisbury in 1795 when he was 20 years old. As his career developed, he returned to paint Stonehenge and its surrounding landscape. Set in the vast Wessex plains, his depictions of the ancient stones proves to be among his most hauntingly atmospheric works.
The first of Turner’s patrons in the Salisbury area was Sir Richard Colt Hoare, a gentleman-antiquarian who inherited the Stourhead estate in 1784. In the late 1790s when Turner was barely out of his teens, Sir Richard commissioned him to paint a series of watercolours of Salisbury and it’s newly restored cathedral, which was then the subject of much controversy. Wiltshire owes much to Colt Hoare for his involvement in the first archaeological survey of the landscape around Salisbury and the books he published on the history of Ancient and Modern Wiltshire.

But it was another local patron, William Beckford, described by Byron as ‘England’s wealthiest son’, who from 1798 gave Turner his most valuable early commissions, and engaged him to paint the gothic folly he was building at Fonthill Abbey. With characteristic bravado, Turner worked on the largest sheets of paper available, bringing all his daring experimental skill to bear, always pushing at the boundaries of technical achievement. His depictions of Beckford’s legendary tower – part of which fell down in 1800 – provide a unique record of its construction. The exhibition will include a series of sketches Turner made on site, usually held in the Tate archive.

The third part of the exhibition will chart Turner’s delightful work in the wider Wessex region – spanning Wiltshire, the Dorset coast, Hampshire and the Isle of Wight. It includes surprising images such as his exquisite watercolours of fish, and witty caricatures made along with other members of the Houghton Club. Many of the waterolours relate to Turner’s popular topographical views, which reached a wide audience as engraved prints and continue to do so today. The exhibition culminates in a record of the historic visit made by the French King Louis Philippe to Queen Victoria in 1844 – the first visit by a French King to England in roughly 500 years.

The exhibition has been selected by the distinguished Turner scholar Ian Warrell, working in collaboration with the team at Salisbury Museum, and builds a vibrant and dramatic picture of the brilliant young artist, driven by self-belief and limitless ambition, grafting his way in a complex world.

Salisbury Museum is proud that the unmatched collection of Turner watercolours of Salisbury cathedral at the heart of the exhibition will be seen together for the first time since 1883. The exhibition offers a unique view into how Wiltshire’s great patrons provided a crucial springboard to the career of one of England’s best-loved artists.