A vintage bus day was held on 5th January to mark the end of over 70 years of Salisbury bus station in Endless Street. It opened in August 1939, but has now been permanently closed with services moving to bus stops around the city.

Six special routes ran with 10 vintage vehicles from across the county. Money raised from the day will be doubled by Go South Coast, which owns Salisbury Reds and donated to Salisbury District Hospital’s Stars Appeal. 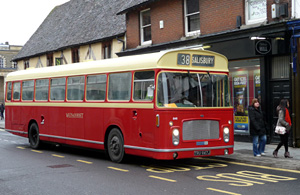 Plenty of vintage vehicle fans turned out for the day, despite the rain which didn’t put anyone off taking photos or travelling on the top deck of the open top bus.

Maureen Hansford said “It was so lovely to see all the old buses today” and Jane Nottle said “I enjoyed see old buses I have some photos and memory.”

Wilts & Dorset sold the bus station because of the high maintenance costs of the building.

Salisbury Travel Shop will remain at the bus station until new premises are found.