English Heritage allowed public access to Stonehenge for the celebration of the 2013 Winter Solstice, the first day of the winter season. Sunrise was at 8.09am on Saturday 21 December and visitors were able to gain free access to the monument from around 7.30am.

The exact time of the 2013 Winter Solstice, when the Earth’s axial tilt is farthest away from the sun, was 17.11pm on 21 December, however it is generally accepted that the celebration takes place at dawn and therefore access was permitted at Stonehenge earlier that morning. 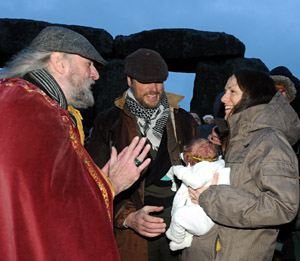 It was a particularly special occasion for 4 week old Jim Lobb who had his baby naming ceremony performed by Rollo Maughfling, the Archdruid of Stonehenge and Britain. Parents Kirsty and Dan brought the infant forward for a blessing and the crowd all joined in three cheers for him.

Over the last few years, the popularity of Winter Solstice has grown considerably, with many families and young people joining the druid and pagan community in the celebrations. Three years ago, 2,000 people attended Winter Solstice, in 2012 more than 5,000 people attended and in 2013 more than 3,500 attended, despite the heavy rain and high winds.

Not all the druids took part in the central celebrations this year. Senior druid Arthur Pendragon led a counter celebration on the other side of the monument in protest at the human remains on display in the new visitors centre. The bones were excavated near Stonehenge in 2008.

It was the first time that a solstice has occurred since a section of the A344 has been laid to grass as part of the multi million pound revamp of the world Heritage site.

The public were able to use byway 12 and one side of the A344 for parking and a limited number were be able to park in the Stonehenge Visitor Centre Car Park.