An extraordinary hoard of jewellery has been found in the Wylye valley near Warminster and has been officially declared treasure today. Salisbury Museum, where the new Wessex Gallery of Archaeology is due to open in late spring, has registered their intention of acquiring it.
The hoard of 41 startlingly beautiful objects from the Middle Bronze Age (from 1,400 to 1,250 BC) fashioned of copper alloy, or in other words bronze, is technically termed an ‘Ornament Horizon Hoard’, meaning it contains jewellery rather than tools. 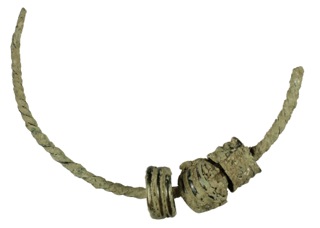 Found in early November 2012 by metal-detectorists, the hoard includes bracelets, torcs (neck rings), ribbed bracelets and an extraordinary quoit headed pin measuring 39.5cm long. A very unusual torc, which was cast rather than twisted, is another star piece in the collection, and shows the high level of craftsmanship and skill at the fingertips of our ancestors in the Bronze Age.
The hoard was recorded and meticulously catalogued by the Portable Antiquities Scheme, before being sent to the Coroner who declared it officially Treasure today. The Treasure Valuation Committee will now set about determining the market value, and the Salisbury Museum will begin raising funds to acquire it.

The British Museum have also declared an interest in the hoard, should the Salisbury Museum fail to acquire it. “It’s appropriate for the Wylye Hoard to be housed at Salisbury Museum, because it was found nearby” said Adrian Green, director of the museum. “The British Museum are interested because it’s a hoard of really rare and beautiful pieces”.

Sadly the metal-detectorists did not leave the hoard in situ when it was discovered. This meant that archaeologists who subsequently excavated the ‘find spot’ were denied valuable clues as to the deposition and the structure of the hoard. 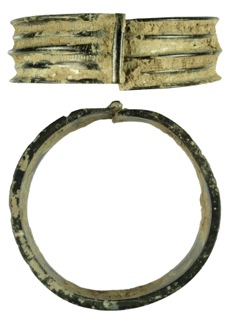 If Salisbury Museum is successful in securing the hoard, it will be put on temporary display in the new Wessex Gallery of Archaeology. “The hoard is outstanding, and in beautiful condition,” said Richard Henry, Finds Liaison Officer for Wiltshire. Not only is it a very significant addition to this type of hoard, it’s also one of the largest with a wide variety of ornaments.

The new Wessex Gallery’s permanent collection will include the outstanding Pitt-Rivers Wessex Collection, and the “Amesbury Archer” alongside many artefacts from Stonehenge. Here, piece by piece, the story of England’s deep past will unfold. From antler picks to animal bones, flint tools to stone tools, beautifully carved chalk plaques to highly decorated grooved-ware pots and beakers – the craftsmanship is truly remarkable.

Over 250 pieces have been loaned by the Salisbury Museum to the new Visitor’s Centre at Stonehenge, which opened in December 2013, in a unique partnership between Salisbury Museum, Wiltshire Museum and English Heritage.

The Wylye Hoard will make an exquisite addition to the new Wessex Gallery. “It’s the nicest example of an ornament horizon hoard that I’ve ever seen,” said Dr Andrew Lawson, a Bronze Age specialist who helped to catalogue the hoard.