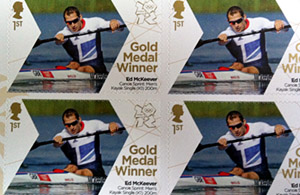 Leading from the start, he put in a very strong second 50 metres and managed to cross the finish line with a time of 36.246 seconds. 30,000 people cheered him on to his victory.

He said: “I was really just focused on the first two or three strokes, and I really wanted to nail those to get out cleanly – then hopefully the race would sort itself out, and it did.”

Saul Craviotto Rivero, from Spain, took silver in a time of 36.540 seconds.

The pair took the lead from the start of the race and remained dominant, crossing the finish line with a time of  7:27.13.

Stanning and Glover are the first female British  rowers to win gold at an Olympic Games.

“I want to collapse but I’m so overjoyed.”

To commemorate their gold medal victory, Royal Mail released a stamp featuring a photo of their historic  win and a postbox was painted gold in her home town in Scotland.

A postbox in Larkhill has also been painted gold but royal Mail say that it was not them. It is thought to have been painted by army colleagues.

Three silvers and a bronze for Stephanie Millward

He finished with a personal best time of 1:04.44mins  and was only beaten by a world record swim from Dutchman Marc Evers who clocked a time  of 1:01.85mins.

Darren Kenny won a bronze medal in the Velodrome in the Men’s Individual C3 Pursuit with a world record time of 3:35.257.

Swindon was one of just 22 places in the country designated as an Olympic Live Site for the Big Screen. The screen was at Wharf Green in the heart of the Brunel shopping centre.

The torch first arrived in the county on 22nd May in Southwick and it  passed through Trowbridge and Bradford-on-Avon.

On 23rd May it entered the county again at Chippenham, passing through Calne, Marlborough, Chiseldon, Wroughton, Royal Wootton Bassett and Swindon.

The torch came back to the county again on 11th July for days 54 and 55 of the relay. It arrived in Ludgershall then passed through Tidworth, Amesbury and The Winterbournes on its way to Salisbury where there was an overnight stop.

A photocall was held at Stonehenge with Olympic 4oom runner Michael Johnson and a special evening event was held in Salisbury at Hudson’s Field.

The next day, the torch left Salisbury from Salisbury Cathedral and headed to Wilton, Barford-St-Martin, Fovant and Ludwell.

The people of Fovant were particularly lucky because this is the second time that the Olympic torch has visited the area – it last made an appearance in 1948.

As part of the London 2012 Festival, Fire Garden was presented by Salisbury International Arts Festival – a spectacular immersive site-specific installation of fire and sound that lit up Stonehenge for two consecutive nights, allowing visitors a unique, out-of-hours experience at the Stones.

The Wiltshire 2012 Festival of Celebration marked the Olympics with an event at Hudson’s Field, Salisbury on July 11th. Chart topping artist Wretch 32 and Abba tribute act Björn Again were the main acts. 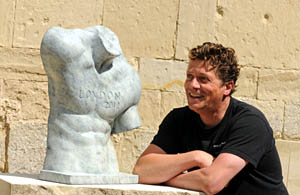 The Olympic Flame arrived at 6.50pm, carried by Salisbury’s Dolly Burnett who lit the cauldron.

Salisbury Cathedral has announced an art installation – the ‘Avenue of Champions’ by Ben Dearnley which will be installed in the Cloisters from 23rd June to 16th September, coinciding with the Olympic Games. 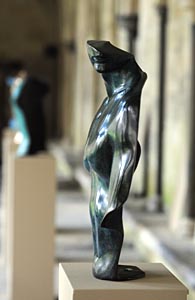 Dearnley describes the exhibition saying: “My work here is an exploration into the world of some of the UK’s top Olympic and Paralympics athletes. I wanted to create a series of sculptures which honour and celebrate their achievements and reflect their individual commitment and excellence within their sport.”

“The sculptures hold something of the power zone of each individual athlete, which I see as pivotal to them being the best in the world at what they do. As such each work is a collaboration between athlete and sculptor, understanding their body’s action and capturing the ‘moment’ in a fragmented form.”

Singer and bassist James Cook from Chippenham, has recorded one of the five official Olympic songs with his indie band Delphic.

The Transfer Bridges roundabout has been planted with nearly 2,000 flowers and herbs, including marigolds and parsley, re-creating the 5 rings of the Olympics to celebrate the Games.

Sacrilege is a life-size bouncy castle replica of Stonehenge created by Turner Prize-winning artist Jeremy Deller. it is touring the country as part of London 2012 Festival, stopping at Marlborough Common, Marlborough on 29th June. Sacriledge is open from 10am – 6pm.