Her Majesty Queen Elizabeth II celebrated 60 years on the throne in 2012.

The actual anniversary of The Queen’s accession to the throne was on 6th February – the day that her father King George VI died. The coronation – a much happier event – took place on 6th June 1953.

To celebrate her Diamond Jubilee an extra holiday wasn granted in the UK so that countrywide celebrations could take place over a four day weekend  from the 2nd – 5th June. 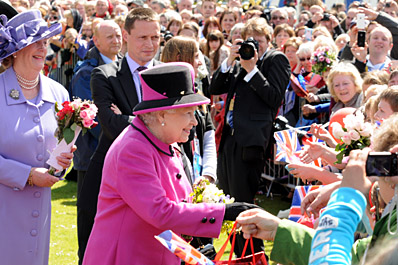 In Wiltshire, the city of Salisbury received a visit from Her Majesty on May 1st which came as part of her tour of the South West. She arrived in the city by Royal Train.

To welcome her,  Wiltshire Council put on a large medieval celebration in the grounds of Salisbury Cathedral. The 18 area boards of the council each occupied themed jousting tents to showcase the history and attractions of their towns, villages and communities.

There was also some fantastic local food such as Wiltshire Lardy Cake and a special Diamond Jubilee sausage.

The Queen and The Duke of Edinburgh attended a lunch at the Rifles Regimental Museum, viewed the medieval exhibits and then met some of the children working on Magna Carta projects inside the cathedral. Before The Queen left she unveiled a plaque commemorating their visit. 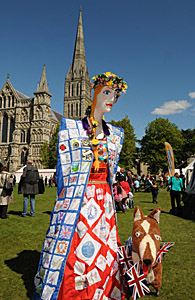 A nine foot May Queen (with corgi) was created to celebrate the Jubilee. It went on display in the grounds of the cathedral during the royal visit. The piece was made by artists Ben Dearnley and Lynn Parr with help from plenty of children and community groups who helped make the Queen’s cloak out of 4-inch squares of fabric. The May Queen was then processed out of the cathedral grounds to the town centre. It will now be on display at the Guildhall.

Events will be held on a royal theme such as the Diamond Jubilee Gala at Trafalgar Park on 27th May, and Hoodwink’s Jamboree Royal Baking Challenge in the grounds of Salisbury Arts Centre on 2nd June (free).

On 4th June, Salisbury Council held a free event in Hudson’s Field which will culminated in the lighting of a Jubilee beacon and a firework display. There was falconry, a parachute display from The Red Devils, jousting knights, Punch and Judy, and the Animal BMX Roadshow. The Counterfeit Beatles were the headline act.

Also on 4th June, Trowbridge held a jubilee celebration old fashioned fair. Among the attractions was a 20th century style Helter Skelter and a Punch and Judy show.

A mini train gave rides across Trowbridge Park and refreshments and food were served by local traders.

Bunting was hung at some of Trowbridge’s most important historical landmarks such as the War Memorial and the Town Hall.

In the first year of having royal status, Royal Wootton Bassett held special celebrations in the town’s High Street.

Hundreds of people  took part in the festivities which included bouncy castles and hog roasts.

During the Diamond Jubilee weekend street parties were held all over the county and on 4th June beacons were lit across the country. The final beacon was lit by The Queen in London.